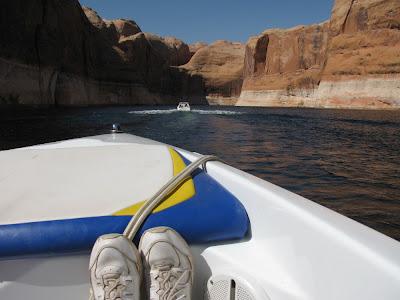 Each houseboat towed a motor boat behind it in order to explore some of the many side canyons on Lake Powell. 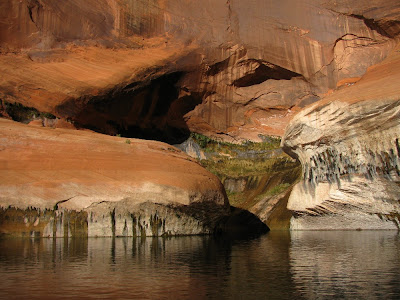 The first day we went up Iceberg Canyon. I thought the formation on the right looked like an iceberg and guessed this was how the canyon was named. 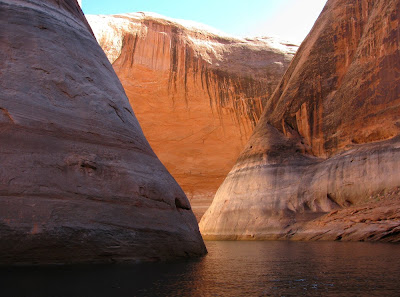 You may have noticed that the bottom 20 feet or so of the rocks are white. That's where the lake used to be. In recent years the level of the lake has been dropping. 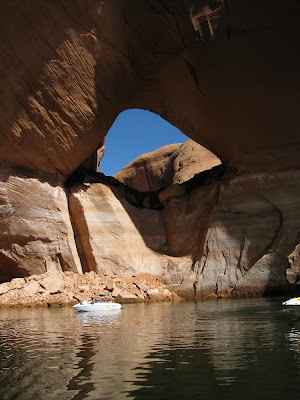 In Davis Gulch we saw LaGorce Arch. The water wound around so we got to see it from both sides. 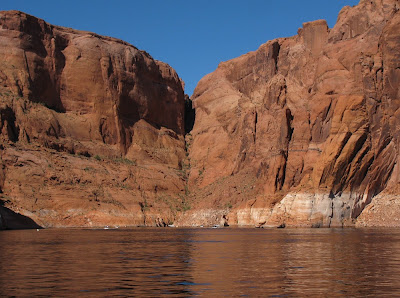 One of the highlights for me was to see the famous Hole-in-the-Rock. In January 1880, Mormon pioneers, looking for a shortcut to SE Utah, lowered horses, cattle, and 80 wagons down to the river through this crack in the rock.

Since this was before the river was dammed, the drop to the river below was nearly 2000 feet with an average grade of 25 degrees, although some places were as steep as 45 degrees. It looks even steeper than that.

Pioneer Elizabeth Decker wrote, "The first wagon I saw go down, they put the brake on and rough locked the hind wheels and had a big rope fastened to the wagon and about ten men holding back on it, and then they went down like they would smash everything. I'll never forget that day. When we were walking down, Willie looked back and cried and asked me how we would get back home." While we weren't exploring there was time for reading on the deck. The weather was a little cold this year, and we never did get to go in the water. 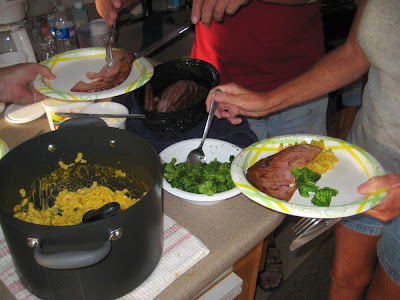 And we sure didn't starve! Each pair of houseboaters made breakfast and dinner on one day of the trip. This was the dinner Phil and I prepared. Lunch was sandwiches we served ourselves. We had a ton of food left over. 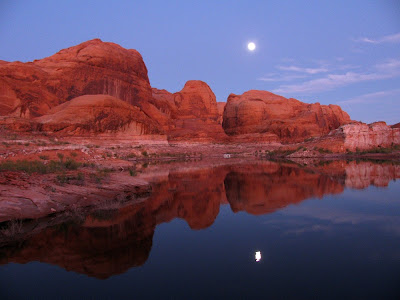 We were lucky to have a full moon for most of the trip. Besides making for nice pictures, we could wander between boats in the evenings without needing a flashlight. 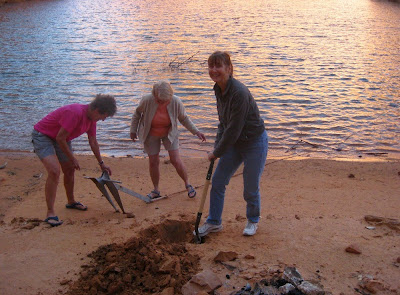 We stayed at Cottonwood Canyon for 3 nights because of high winds. On the last day, we moved to Moki Canyon, a little upstream from Bullfrog Marina. By then even I could get the anchors in. (Of course, this was a soft sandy beach and it was really easy...) 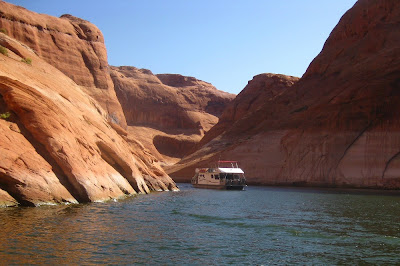 The next morning we headed out of Moki Canyon and back to civilization. 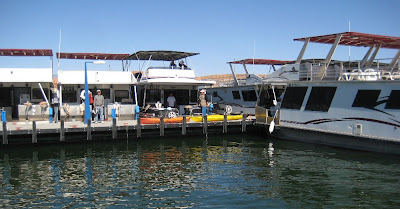 All in all, I had a great time. We had cool weather and some mechanical problems (apparently the boats are not maintained very well at Bullfrog), but saw beautiful scenery and everyone on our boat got along with each other very well. I would definitely do it again, but maybe with 8 on board instead of 12.
Posted by Diana at 3:04 PM