Oh No - Not Another State Capitol! 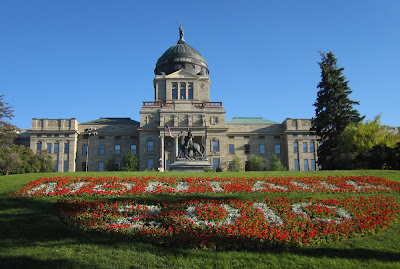 Montana has a beautiful capitol building in Helena. It looks vaguely familiar, but we'll get to that in a minute. 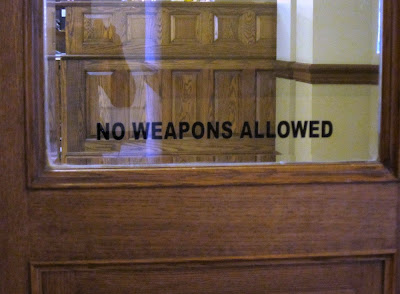 I really liked this - instead of a metal detector at the door, they had this simple sign. 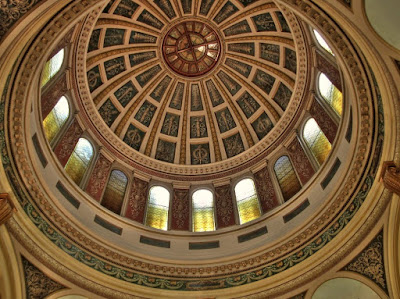 But wait a minute - the dome is beautiful, but it looks a lot like the one in Pierre, SD. My post on that capitol is here. Turns out that after Montana spent quite a bit of money for the design for the capitol, South Dakota turned around and bought the same plans for $15! 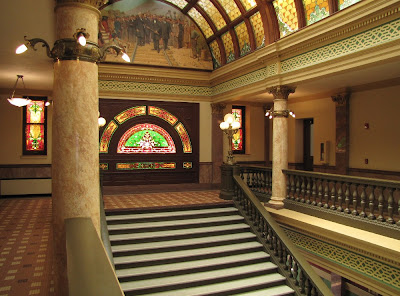 So there are many similarities. The Grand Staircase with the "barrel vault" ceiling, and a painting at the end. Here the painting is "Driving the Golden Spike." It shows Ulysses S. Grant driving the spike that completed the Northern Pacific's Transcontinental line. 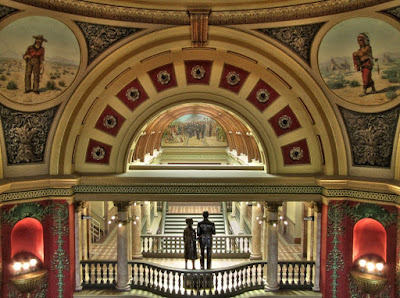 Here's another view from across the Rotunda. The statues are of Mike and Maureen Mansfield. Sen. Mike Mansfield was one of Montana's best-known polititians. He agreed to the statue before he died only if his wife was included. 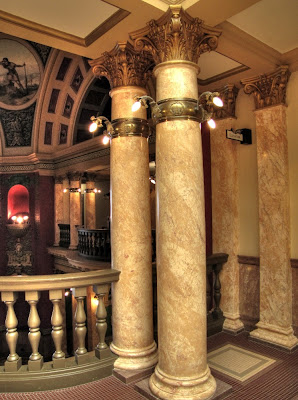 Montana also has the faux marble columns called "Scagliola." However, while South Dakota had them to save money, Montana has them to accomodate electrical wiring. Montana was the very first state to have electricity in their capitol, and they are very proud of that fact. 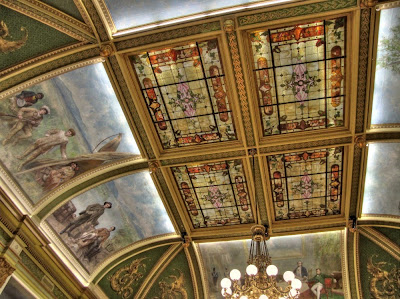 The ceiling of the Old Supreme Court Chamber is very similar to the House Chamber in SD. It features a beautiful stained glass skylight surrounded by paintings of famous moments in Montana history. 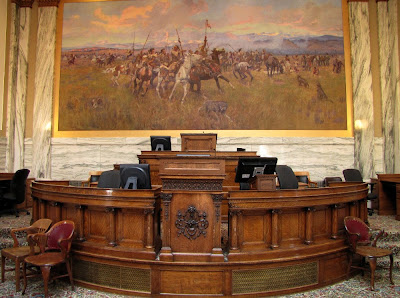 This most famous thing in the Montana capitol is this 25' by 12' Charles M. Russell painting in the House Chamber. It shows Lewis and Clark (in the upper right hand corner) meeting the Salish Indians at Ross' hole on September 4, 1805. This is where they got the horses to get them across the Rockies before winter came.

Notice that Lewis & Clark are not the prime focus of the painting. That upset some people at first, but people now realize that it was very clever.

Russell painted the mural in his tiny log cabin in Great Falls, and had to raise the roof to fit it in. 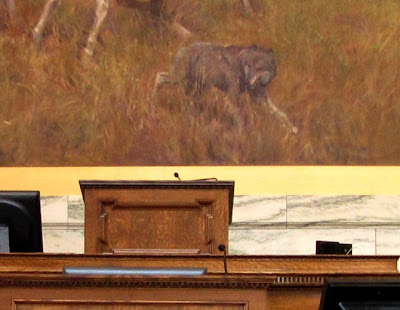 But here's the funny part-- Every person and animal in the painting is focused on Lewis and Clark except this wolf-dog in the foreground. He looks like he's about to bite the head off the Speaker of the House. Turns out Russell did not like the Speaker, but later they made up and became good friends.
Posted by Diana at 7:59 AM