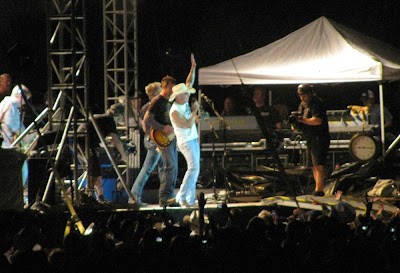 Kenny Chesney was just one of the big names performing in the evenings at Cheyenne Days, but the only one I had tickets for. Unfortunately, they were just about the worst seats in the house, but I had my 10X zoom camera. And fortunately, there were also big screens to watch on. 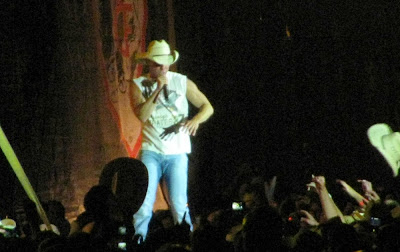 Kenny has had more than 30 Top Ten Country songs, including 17 Number One's. He is quite a performer, and has a terrific band of about 12 members. 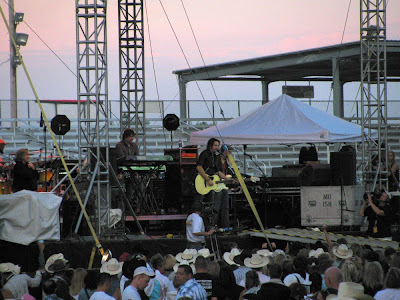 Now, you don't think I left without getting some illegal videos, do you? Sorry the quality is so bad, but I had to tape them from the giant screen, since I was so far away.

Jake's first Top 10 hit, "Startin' with Me," spent 35 weeks on the country charts. It's a song about regrets. To hear the whole thing, click here.

His latest big hit reached #2 on the country charts, "Don't Think I Can't Love You." Both are beautiful songs.

Then Kenny came on and the crowd went crazy. Here's part of his big hit, "Don't Happen Twice."

And Jake came out to join him in my favorite, "She Thinks My Tractor's Sexy."

After the final song, the crowd demanded an encore, and Kenny and the band came out and had fun performing non-Kenny songs. It was quite unique.

All together, a great evening!
Posted by Diana at 4:46 PM