There's a Lot to See in Key West! 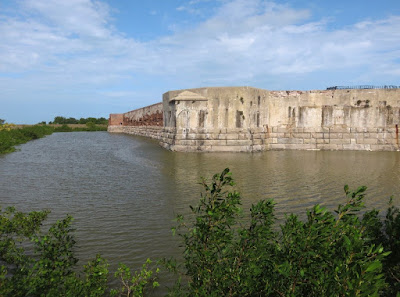 Of course, if there's a fort to be seen, I'm there. Fort Zachary Taylor in Key West is Florida's Southernmost State Park, located right in Key West. 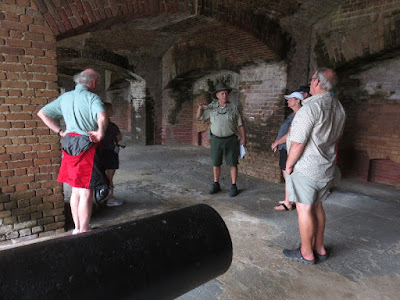 We got there just at the right time - a tour was just starting. 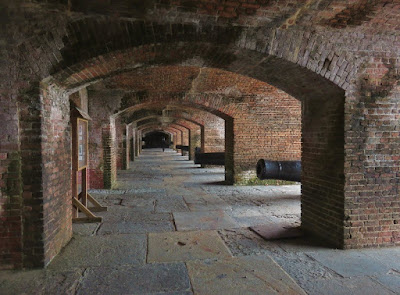 Construction began here in 1845, and the fort remained under Union control throughout the Civil War. It contains the largest number of Civil War-era seacoast cannons in the US. 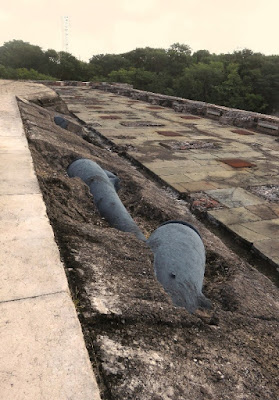 Some of them are still buried between the walls. 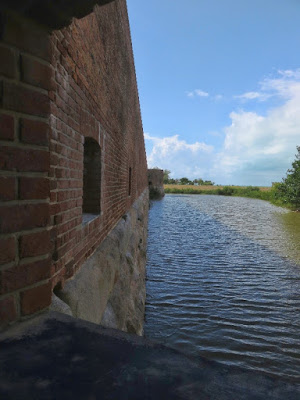 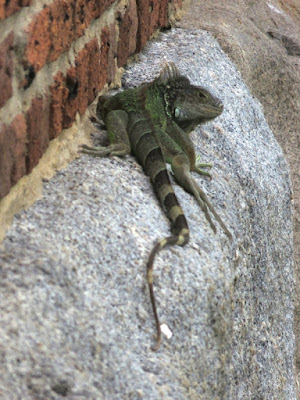 It's a big iguana! 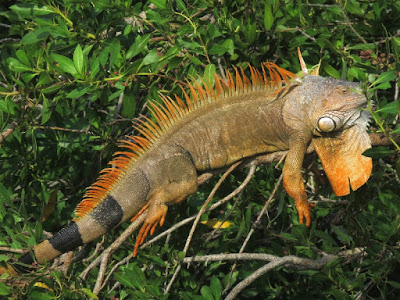 We also saw 5 big iguanas sunning themselves in a tree. It's hard for me to believe I'm still in the US! 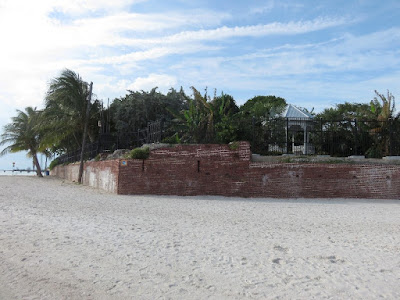 West Martello Tower is also the remains of an old fort in Key West. 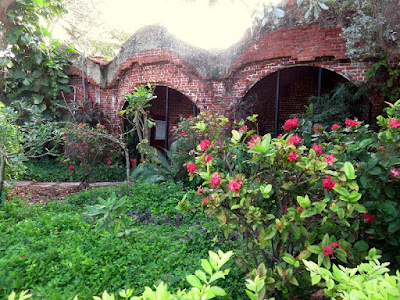 The Key West Garden Club has taken it over, planting flowers among the remains. What a great idea! 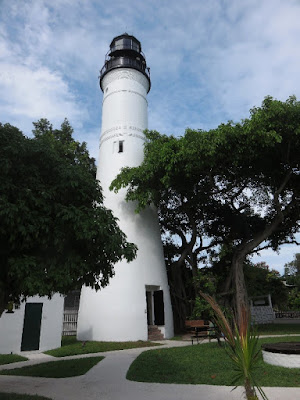 And of course I had to climb the Key West lighthouse. 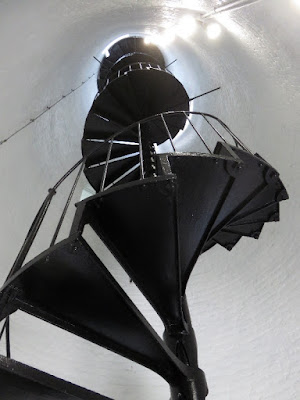 It's not as tall as some of the ones we've been to recently - just under 100 steps. 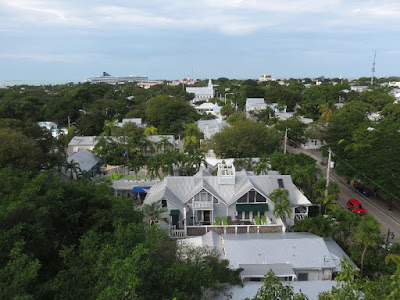 There's a wonderful view of Key West from the top. 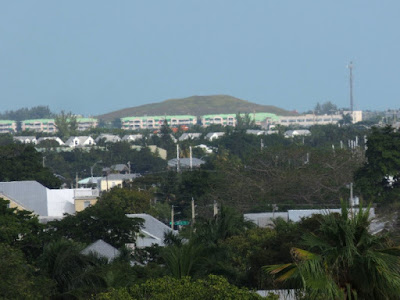 You can even see Mount Trashmore, a former landfill that is the highest point in the Keys! 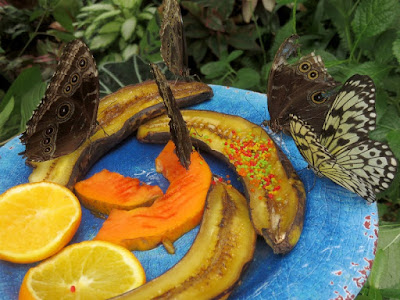 We also went to the Key West Butterfly and Nature Conservatory. I'm not sure why there are sprinkles on the banana, but it seems to work. 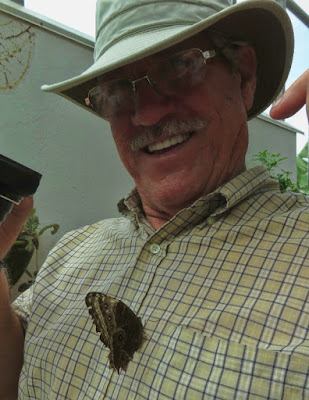 One of them got quite attached to Phil. 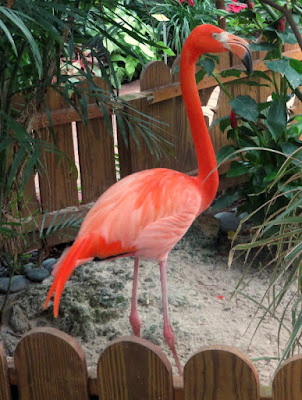 And there were two flamingos there - Rhett and Scarlett, rescued from a breeding facility in Canada. I'm sure they like the weather better here. 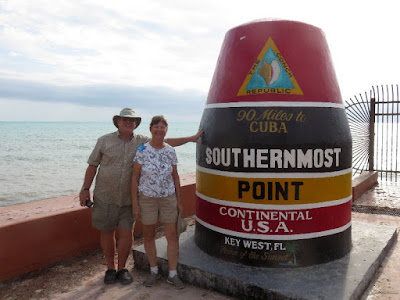 Of course we had to go to the Southernmost Point in the Continental US. There is a big long line to get your picture taken here. 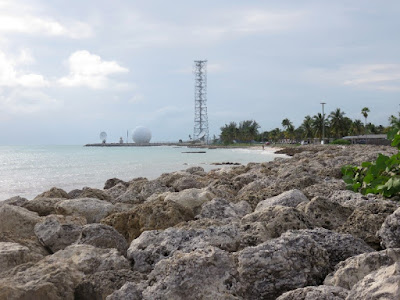 BUT if you look on Google earth, you will see that the point over there with big ball is farther south. I feel so lied to... 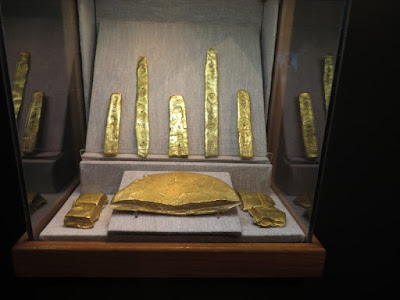 And then we headed over to the Mel Fisher Museum. Mel discovered the 1622 wreck of the Atocha, the richest Spanish galleon ever salvaged. I was a little disappointed. Sure we saw some gold, but I was expecting to see more of the $450 million cache that he recovered. 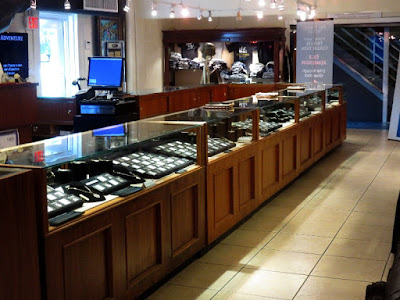 I guess a lot of it was in the gift shop. 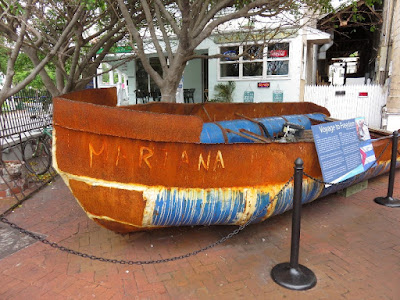 Outside is yet another "boat" that arrived in Key West a few months ago from Cuba. This one is made from 12 55-gallon drums and powered by a pickup truck engine. It held 24 Cubans.

I've left the best for last - in the next post!