I Finally Get to See Some of Tahiti 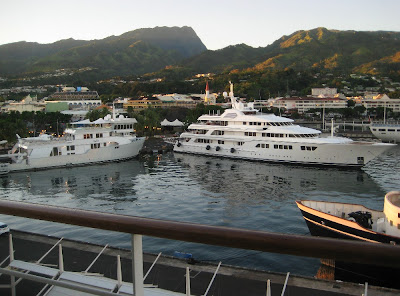 When we arrived in Tahiti (a long time ago), we were immediately transferred to the cruise ship, and didn't get to see any of the island.

But we arrived back in Tahiti last night, and our plane back to LA doesn't leave until 10:30 tonight, so we have some time to explore. 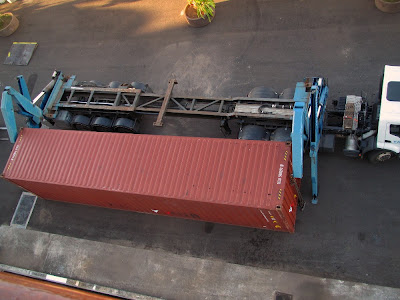 Looking down from our balcony, you can see they are loading supplies for the next cruise, which leaves tonight. They want us out of our rooms by 9:30 am, but do a very good job of taking care of us until the plane leaves tonight. 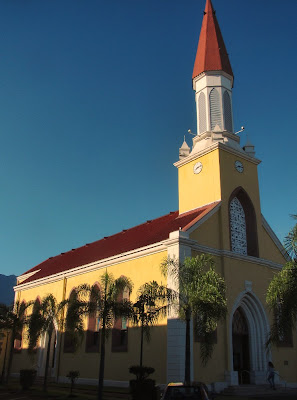 We took a short walk to the town of Papeete, where I wanted to see the Cathedral of Notre Dame. 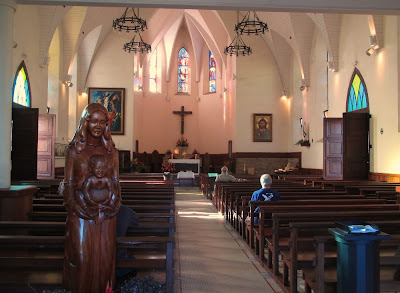 It was built in 1875 and has been restored a few times. 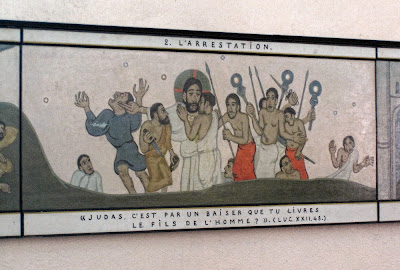 Whenever I go into Catholic churches, I like to look at the Stations of the Cross. They are usually done in an interesting manner, but these hand-painted Tahitian ones are the most unusual I have ever seen. 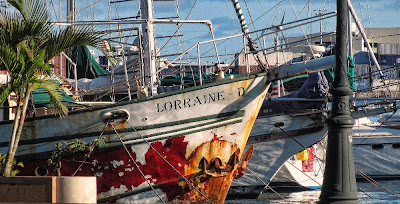 Papeete has a very busy harbor, compared to the other islands. I found an interesting rusty tour boat. If your look at their website here, the ship looks nothing like this.

There were some outrigger racing canoes zooming through the harbor. 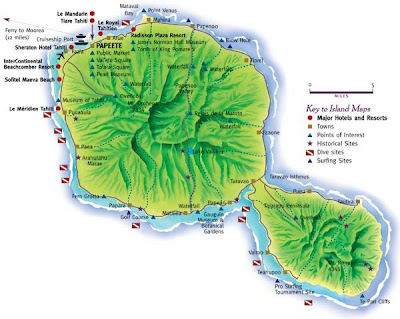 At noon, after an early lunch on the ship, we were given a free 2 1/2 hour tour of the north coast of Tahiti. 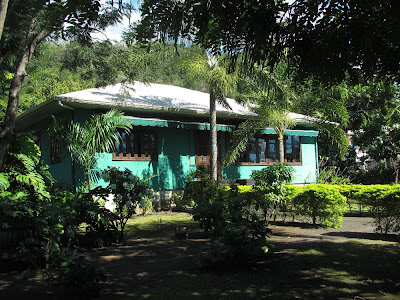 The bus made 3 stops; the first was the James Norman Hall House. Mr. Hall was an American hero of WWI who moved to Tahiti in 1920. He is most famous for having co-wrote the book "Mutiny on the Bounty." 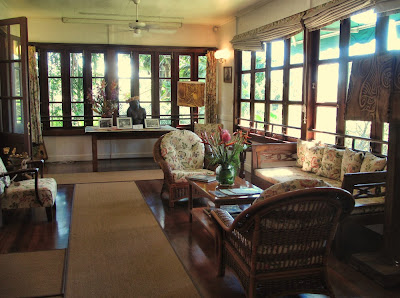 The house is filled with antique wooden furniture, family pictures, favorite paintings, and other memorabilia. 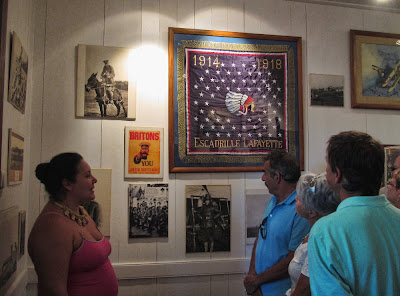 We got a great tour from a very personable young lady.

Mr. Hall's son, Conrad L. Hall, is also rather famous. He has won 3 Oscars for his work as a cinematographer in Hollywood films, including "Butch Cassidy and the Sundance Kid." 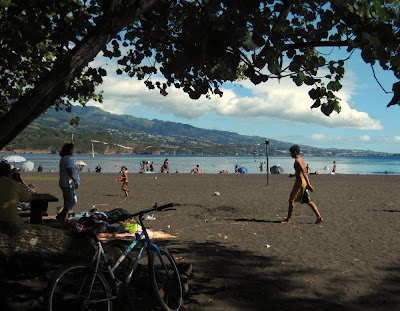 Our next stop was historic Matavai Bay, most famous for three events. The first European to discover Tahiti, Captain Samuel Wallis, came ashore in 1767. Captain James Cook sailed into this harbor in 1769.

And then Captain William Bligh arrived aboard the Bounty in 1788. They stayed 6 months, and a few days after they left, a mutiny broke out. The mutineers returned to Tahiti, before forming a colony on the Pitcairn Islands. I guess they knew a good thing when they saw it... 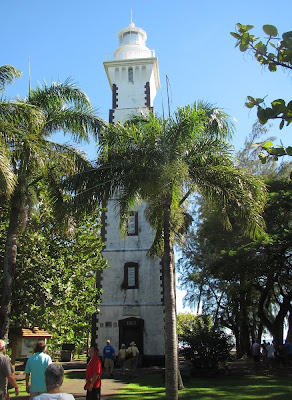 One of the few traditional lighthouses in French Polynesia is located on Point Venus, beside the bay. 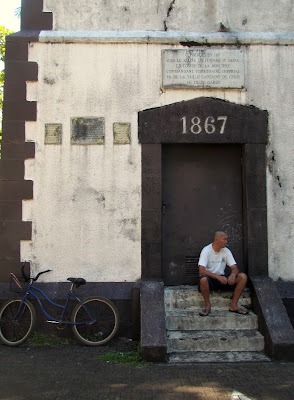 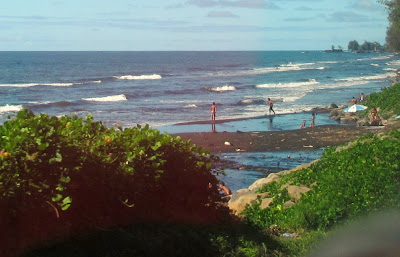 Back on the bus, we saw surfers for the first time. Most of the islands are surrounded by reefs, the waves are outside the reefs, and if you try to surf out there, you'll crash into very sharp coral. 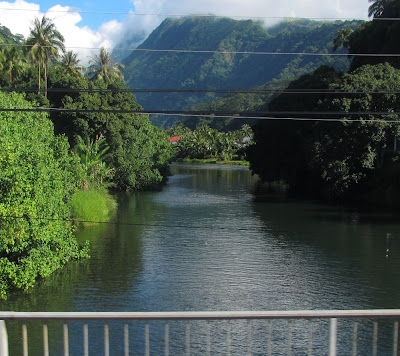 This tiny island has several rivers; this is the largest. Where does the water come from? As you can see, it rains a lot at the top of the mountains, the water runs down - 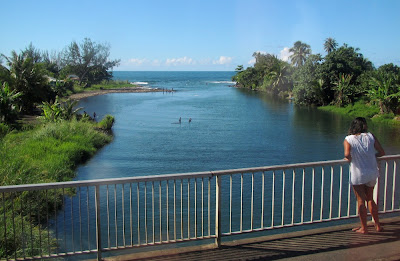 And into the ocean. 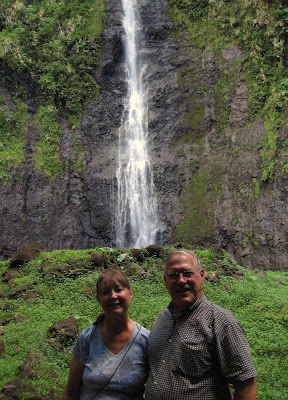 Our last stop was at Vaimahuta waterfall. I knew there were several waterfalls on the island, but I hadn't expected them to be so huge!

I put 3 pictures together to make this shot. 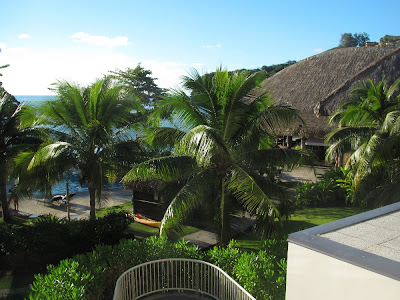 After the tour was over, we got dropped off at the Radisson Resort, and given an oceanfront room for the afternoon. 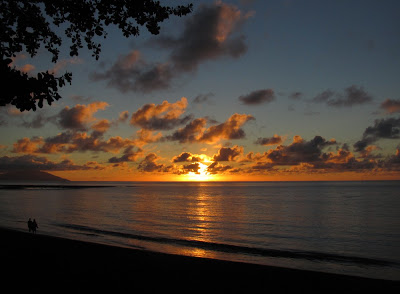 When our time was up there, we made our way over to the restaurant to get some dinner. The sun was just going down. 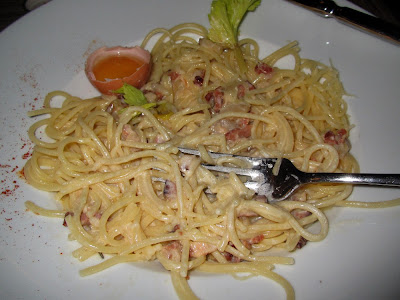 I got Spaghetti Carbonara, Phil had Cheeseburger and Fries, we each had a drink, and the total bill was almost $100! (Did I mention Tahiti is really expensive?)

By the way, does anyone know the purpose of the raw egg on the Spaghetti Carbonara? 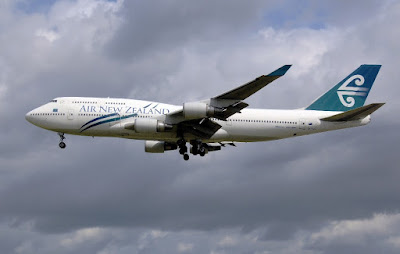 After dinner, we were transported to the airport. We had a ticket back to LA on Air Tahiti, but kept hearing rumors that they had gone on strike! Oh no, we might be stuck in paradise!!!

But Air Tahiti must have chartered a 747 and crew from Air New Zealand - that's what we ended up on, and it was still considered an Air Tahiti flight.